On Startup
It is always nice to have a message display on startup so you know you have the correct program loaded up. E.g. 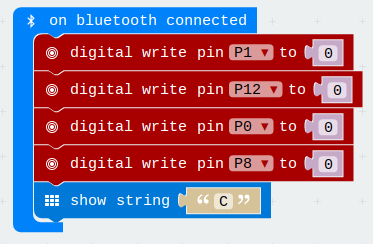 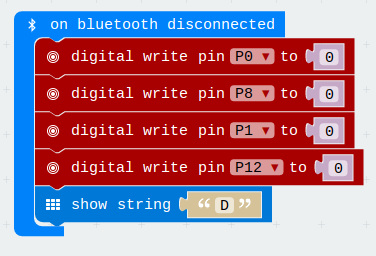 Move Forward
We are going to code up that when button A is pressed we will move forward and when it is released the robot will stop. This is not the only way of doing it but a nice straight forward way for this tutorial.
To move forward we need to set pins 1 and 0 high while pins 12 and 8 are low. We do this when the button A is pressed and all pins are low when the button is released.

Move Backwards
Button B is going to move the robot backwards and to do this we reverse which pins are high. This means that pins 12 and 8 are high. Same as last time, to stop the robot on releasing the button we set all pins to low.

Spin Left
Button C is going to make the robot spin left. We do this by making only the right motor move forwards.

Spin Right
Finally button D is going to spin the robot right and we do this by just rotating the left motor forwards.